Ah. Weeks 7&8. Yes. Where to begin, I have no idea. So am flicking through my notebook to pick some high/low lights:

The many sayings of Bikram
Lock the fucking knee!
(To us when we all turned up at class wearing black, nearly all 275 of us)”is it somebody funeral? It’s not my funeral! You will all die before me and jump on your coffin box screaming lock the knee lock the knee lock the knee! Actually I like it- you look like Bikram army!”
It’s my speciality to live with the good and ignore the bad (I loved this because I am a person who definitely gets bogged down with the bad- cruelty to people and animals in particular. I really focus on it sometimes but if I can spread some good in the world through teaching yoga and making others feel good I will be happy 😊)
Bikram, talking about the re-cert teachers “I told them not to teach yoga anymore but sell tempura instead!”
To my friend Zara in class “you look like crow pecked your hair off!”
“You cannot underestimate yourself or you will fail”
“I am making you bulletproof”
“I take you out of deep shit and put you in cheesecake!”
“Humans are the slaves of bad habits”
“You have everything: you have nothing. Having doesn’t mean anything if you don’t know how to use it”
“You can disappear yourself like a Frankenstein or something”
“I used to run faster than a panther”
Classic.

Bikram also lectured us on Spiritualism which was interesting.

Week 7&8 have been extreme ups and downs emotionally for me, one second I have felt so low and the next really happy like I can do anything, it’s been really hard. But my body has felt strangely strong and hard, even in some of the killer hotter than hot 2 hour classes.

We had Monday night off for Manalis birthday!!!!! Pizza and dancing! I went to bed at 9.30😴

Emmy lecturered us again “hidden and latent powers lie dormant in every human being. It is our job to bring these powers out through our yoga practice to be fully self realised”
She also spoke about the Bikram series, comparing it to the alphabet (26 postures/26 letters) without the specific order and number there would be no meaning, there is no need to add anything or remove anything.

The selection for the Demo Team (team of yogis who demonstrate the series at graduation in stage) happened week7. I hated this as deep inside I wanted to be picked so I could feel like I am good enough but at the same time I didn’t. I was picked! I took part for the first few days but then was cut which was the right decision. Being in the same group as some seriously bendy noodles I felt totally out of place. As Jim callett said some of us are made of spaghetti and some of steel- I am definitely steel, the minimal flexibility I have has taken 6 years of hard hard work and it is still nothing compared to some people here who have been practicing for a year and have beautiful postures. But I am lucky in a way as working that much more for it should mean it will last forever💪

Petra. The CEO of bikram yoga lectured us. She used to advise president Obama but now is with bikram- she said that bikram is much more stressful. She spoke about opening a studio and Balwan lectured us. As usual he was hilarious (he told us that we are “not normal right now”

Stephanie taught class. She is a young Australian girl and is Manalis assistant. Her class was fantastic. She has been amazing to me and really helped me in posture clinics so knows me and therefore corrected me a few times in class whic was amazing. I have missed that so much! She focused on the medical benefits of the postures and started class by saying she has 3 rules “breathe, smile, stay in the room”❤️

Other lectures
Research
Dr Das- rajashrees guru. What a wonderful man! He was so so so lovely and spoke about yoga as therapy
Animesh Ray- Bikrams brother in law- gave my favourite lecture on creation and the purpose of our lives. I absolutely loved it and found some of it quite emotional. Some of my notes “the curious thing is that we are even aware the universe exists around us”
“However deep the darkness one must shine a light into its depths”
“If your yoga practice keeps your mind focused on your own sense of purpose in your own life, then so be it”
Then bikram came on stage , told us we were going to watch a film (it was midinight) so we all went to the loo. Came back, sat down, and he goes “everybody ready?” “Yes boss!” “Ha ha I got you! Only joking! Good night everybody!” I have never felt so happy😊
Dr Gillian glass- confidence through bikram vocal yoga. This was brilliant and we learnt some grat tops

So, week 9! Manali has said all along “don’t count the ninth week!” So tomorrow as she tells us to “sit up on your mats!” I wonder what we have in store? 🙏 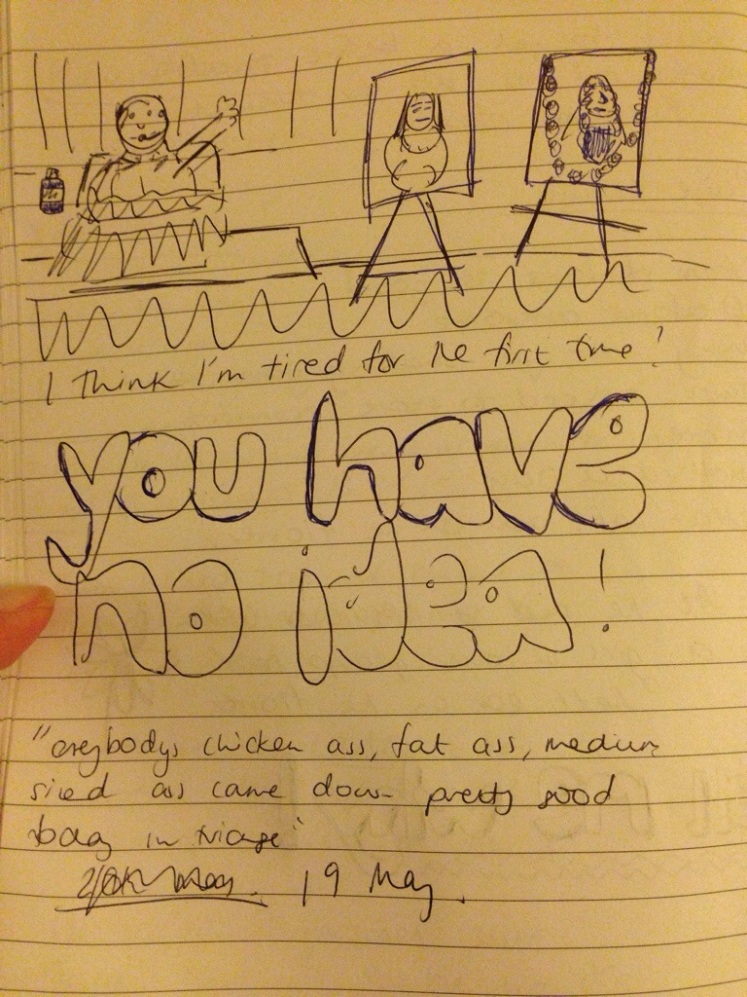